I was happy to finally clear my calendar and get back To St. Barth last month. I needed my fix! It was nice to see how well the island had recovered from Hurricane Gonzalo’s wrath. Most of the damages were to the boats that were moored in the harbor area because there was no warning that a hurricane was developing. It was supposed to be a tropical depression that was just passing through so no advisories were given to boat owners to alert them that they should be seeking shelter. As a result, 42 boats were destroyed. The population on St. Barth is resilient so the cleanup began immediately. The only lingering signs that I could see were a couple of boats that had washed ashore and had not yet been removed and I observed some loss of vegetation at a few of the villas that I inspected and that was quickly growing back. When you get to St. Barth, you won’t even notice.

As always, I had lots of things to do including villa and hotel inspections and checking out anything new so that I could tell you about it. I invited friends to join us and we stayed at Villa Capri in Pointe Milou. Tradition finds us at Andy’s Hideaway on our first night.

I’ll be back in St Barth in a few days and will be based there until May. I hope to see you at our weekly cocktail party held at La Plage restaurant on Wednesdays from 7:00 pm to 8:00 pm!

In the meantime, Connie Walsh, our marketing consultant has written her trip report as a guest blog.

The highlight of the trip was our big party, the Seaside Soirée that was held at the hotel Taïwana November 14. It was a huge success with more than 200 guests attending.

I made my annual pre-season trip to St. Barth the week of November 7, and like many other island devotees, I salivate enroute over the plethora of fabulous restaurants. I have my favorites, but I’m always excited to see what’s new. Upon landing my husband and I received a VIP meet & greet by St. Barth Properties’ president Peg Walsh, and we were off to Pointe Milou and got settled into Villa Capri. What a view!

We had a first-night dinner reservation with Peg and her husband Steve at M&P. I hadn’t dined there in a few years, and it was as good as I remembered. The acronym stands for Meat and Potatoes, and admittedly it sounds at odds for chi-chi St. Barth. But a breezy steakhouse on the road to Saline Beach, its sophisticated menu is a carnivore’s dream, but trust that vegetarians have loads of choices. We noshed on the Chateaubriand, accompanied by a choice of over a dozen sauces, Bordelaise, Roquefort, Porcini … my fave Béarnaise, and two sides.

We had some divine Gratin Dauphinois and Kenyan (fair trade) green beans. Thursday night is burger night at M&P if you’re in the mood. We always get our burger fix at the iconic beach-shack Le Select, now celebrating its 65th season. Jo Jo Burger in Lorient gets rave reviews– and they make a mean mahi-mahi sandwich too. I’ve promised myself I’ll stop in one of these days for a post-beach burger.

The always fun Andy’s Hideaway is our go-to for pizza, thin-crust and relish. We also love the pies at the little Gustavia eatery L’Entracte but it was undergoing a major renovation – next time. By the way, Grand cul de Sac’s La Gloriette, which we adore for leisurely feet-in-the sand lunches – and their ginger rhum – offers pizza in the evenings.

Our musts are Le Carré located in the glam shopping arcade of the similar name, Le Carré d’Or; it has a charming Parisian sidewalk café feel. Go for lunch and dinner. It’s that good. They had me at the truffle oil popcorn starter on my first visit, and I think they make the best Margarita on the island. And of course, Santa Fe. Trip advisor rates them # 1 in St. Barth. No surprise. It’s another lunch-and-dinner stop, the afternoon breezes and the views over Gouverneur pair beautifully with a bowl of gazpacho and a glass of rosé. Mussels are Thursday’s lunch and dinner special – mark your vacation calendar. Our small group dinner there began with a coupe de Champagne, their signature Wahoo fritters and went on to include a number of classical French dishes. We shared escargots redolent with garlic, Beef Bourguignon, Sole Meunière that would make Julia Child weep….and oh, the desserts. My favorite is the Peach Melba.

The new & noteworthy include the restaurant and crêperie L’Ardoise in Villa Créole St Jean. They pay homage to the island’s ties to Brittany where the crêpe was invented and called a galette. The soft dessert crêpes include the uber-popular Nutella and a deconstructed profiterole. The atmosphere is casual and lively, the prices reasonable and it’s catching on with residents and visitors alike. Cocktails are being stirred and shaken at the brand new and lounge-y bar Modjo. From the outside, an unassuming edifice (next to Andy’s) has been totally renovated with an exposed loft ceiling and industrial-chic lamps. The room’s focal point is a long bar and it is filled with oversized sofas and comfortable chairs. Open nightly from 7:00pm – 3:00 am, they offer a creative menu of small plates. And there’s alternately live music or a DJ spinning tunes. C’est très hip!”

Our best dinner? That was St. Barth Properties’ annual launch-the-season Seaside Soirée at the Taïwana Hotel. F&B director Octavio and his team outdid themselves with elegant passed hors d’oeuvres, starters, mains, and desserts. We did the taste-testing one afternoon on our June trip, and it was as amazing as remembered and with the addition of music, a starry night and over 200 people – spectacular.

A few days into our stay, we were joined at Villa Capri by another couple and mixed some vacation time with our work. The bedrooms at Capri, like so many, have baths en suite and loads of pool-side outdoor living space making it ideal for sharing with friends. We took turns making the morning baguette and croissant run, enjoyed our coffee with a view, post-beach pool time and toasted the Technicolor sunsets before heading out to dinner. (The new owner is planning some fabulous changes. Stay tuned.)

Villa inspections are always on our work-agenda and we stopped in to see the refurbishments at the charming Villa Rosebud – sure to make it more popular than ever – and the brand-new and breathtaking Villa My Way.

This gorgeous five bedroom home in Colombier was named for Frank Sinatra’s theme song and the bedrooms, décor and amenities (a grand piano, projector and giant screen and a fabulous sound system) give a nod to his fellow mid-century songsters.

Just Back From St. Barth (aka Paradise) – Fall 2021 Trip Report by Allegra Pawlowski 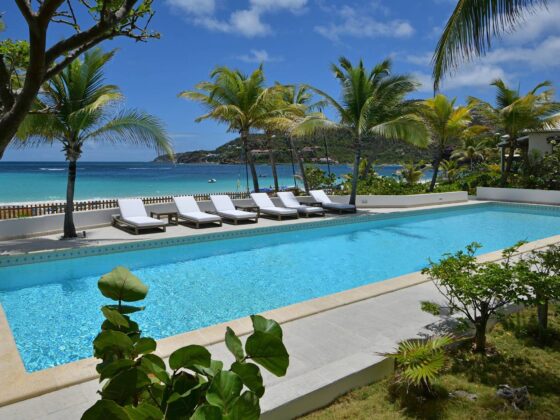